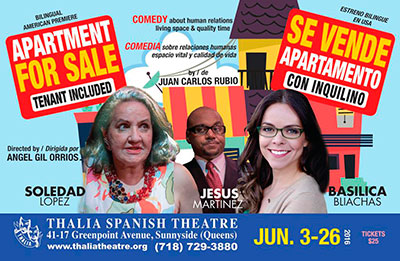 …The venerable Thalia Spanish Theatre, in Sunnyside, which has presented over 200 productions in its 38 years of serving the community, is the only bilingual Hispanic theater in the borough. Its latest offering — in alternating English and Spanish versions — is a return engagement of the American premiere of “Apartment for Sale (Tenant Included),” by renowned Spanish playwright Juan Carlos Rubio, with an English version by Roger Pettitt.
The play is described as a “comedy about human relations, living space and quality time.” And its title suggests a light-hearted romp, perhaps leading to an “Odd Couple”-type situation.
But the show, which does have some laughs, is alternately a sad, surprising and, ultimately, life-affirming look at some difficult situations to which most people can easily relate…

This website uses cookies to improve your experience while you navigate through the website. Out of these, the cookies that are categorized as necessary are stored on your browser as they are essential for the working of basic functionalities of the website. We also use third-party cookies that help us analyze and understand how you use this website. These cookies will be stored in your browser only with your consent. You also have the option to opt-out of these cookies. But opting out of some of these cookies may affect your browsing experience.
Necessary Siempre activado
Necessary cookies are absolutely essential for the website to function properly. This category only includes cookies that ensures basic functionalities and security features of the website. These cookies do not store any personal information.
Non-necessary
Any cookies that may not be particularly necessary for the website to function and is used specifically to collect user personal data via analytics, ads, other embedded contents are termed as non-necessary cookies. It is mandatory to procure user consent prior to running these cookies on your website.
GUARDAR Y ACEPTAR
Ir a Arriba