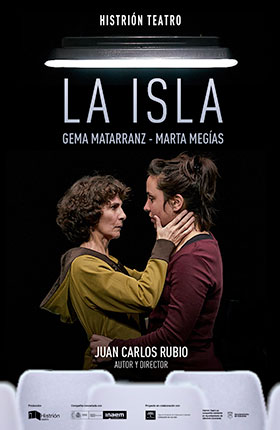 Ada and Laura are waiting for some terrible information: Will their 11-year-old son survive the accident that has destroyed his body?The mental disability of the childhas turned theirexistence into an absolute hell. If he dies tonight in the operating theatre, maybe, just maybe, they will be able toremake what they have left of their relationship, what they have left of illusions, what they have left of life. But is there life after wishing the death of a child? How far are we able to endure suffering? We are not prepared for the pain, but the pain is there. In our bodyand, above all, in our mind. Are we monsters for wanting to escape from it? Or is it simply human to protect oneself, even at the expense of others, even of the most beloved ones? The islandexplores that fine line that separates what we feel from what we can recognize that we feel in front of others and in front of ourselves. The islandspeaks of the pain of living and the pain of being dead in life. Because, after all, we are all an island surrounded by water and solitude. 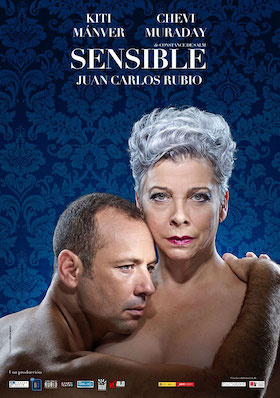 Is love sensitive? Are we sensitive when we become obsessed with someone? Or do we become insensitive, unilateral and hard beings, blind to anything that is not the object of our desire? Sensible is an exciting show that immerses us in the range of sensations and affections of the soul masterfully drawn by Constance de Salm in her famous epistolary novel Twenty four hours in the life of a sensitive woman. In it we discover how a mature and well-off woman goes through all the stages of calvary when she discovers, at the exit of the opera, the supposed betrayal of her young lover. Spiteful, throughout an intense day, she plunges into a spiral of madness while she tries to regain her lover’s attention. 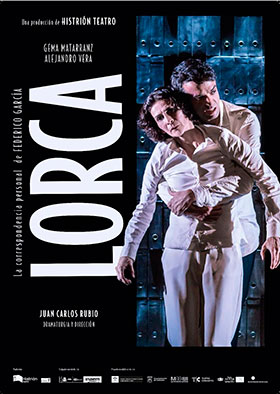 One hour before being killed, Federico García Lorca, imprisoned in his cell, lets his boundless imagination fly, remembering the most important moments of his life. A poetic journey, happy and sad, vital and desperate, bitter and sweet, where the letters sent to his loved ones become the common thread. 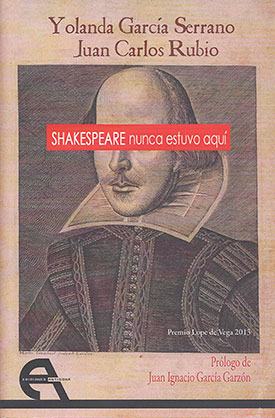 1939. In a small village near Stradford Upon Avon an original manuscript of Shakespeare, that was thought lost, appears: Cardenio. It has caused such great stir that an ironic London journalist decides to visit the place and uncover the truths and lies surrounding the event. Shakespeare was never here is a comedy that challenges the value of the false and the authentic and takes us to a past time in which, even to be a thief, you had to be honest. 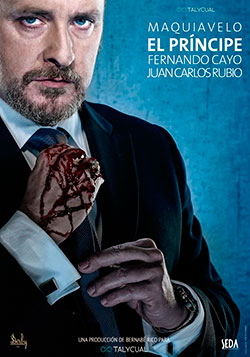 Machiavelli wrote The Prince in 1513. Five centuries later, his words are still absolutely valid. Isn’t it frightening to think that, no matter how much time has passed, the rules of power are always the same? In these times of political upheaval, lies, corruption and abuse, take a look at the past can help us understand the present. Machiavelli’s clairvoyant analysis makes clear, once again, that the exercise of power requires maneuvers and decisions that are not always ethically appropriate, but could we live without them? A play that can not remain indifferent to any citizen who depend on the decisions of their leaders. Anyway, if we think for a moment… is there anyone who doesn’t depend on that?

Despite the difficulty of the text, Juan Carlos Rubio summarizes really well the most significant parts of Machiavelli’s essay and he completes the plot of this play with other texts by the author . Coverset.es

Adaptation and direction is provided by Juan Carlos Rubio, taking us from a priori complicated work to an entertaining and fast play, where we attended shocked at the similarities with the time in which we live. … El teatro que me gusta.

The adaptation of the classic essay, by Juan Carlos Rubio, gets relevance and contemporaneity. Tendencias21.net 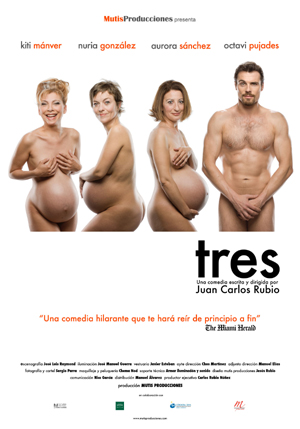 Three girl friends meet after 20 years of not seeing each other. Many things have happened since they were little girls and studied together. Now, adults, they have realized that their lives have not gone in the right direction. Of course, it is never too late to change the course of events. What if they look for a man? And if they have a child? What if that man impregnate the three of them?

A hilarious comedy that will make you laugh from beginning to end. Miami Herald

Rubio presents a hilarious comic toy built for the sole purpose of making people laugh. And this is achieved by far; the audience burst out laughing from the start. Diario de Córdoba.

It’s a play that entertains with characters and situations clearly extracted of everyday life, whose affairs transcend the local framework. The importance of family life and the very definition of family as well as the prevalence of sex today, personal success and frustrations up to 40 years, are some of the universal issues discussed at length. The combination of seriousness, humor, depth and lightness make this play a well-balanced dramaturgical composition. El Nuevo Herald. 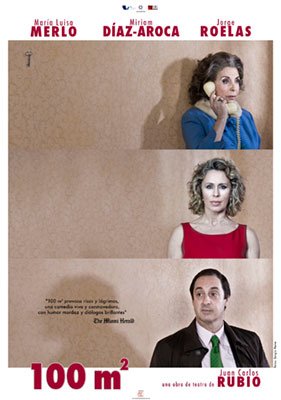 The flat that the estate agent offers Sara has all the features she wants: low price, spaciousness, light and beautiful views. It only presents a small «inconvenience»: the lady that owns the apartment will live in it until the day of her death. Lola (over seventy) has had two heart operations and, certainly, she will not last much longer. Especially if she continues smoking a pack a day and drinking as much as she can. Sara decides to buy the flat and wait. But we all know that events do not always unfold as planned. 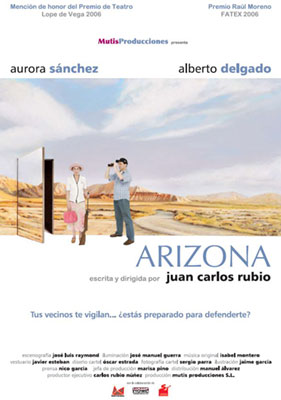 George and Margaret must defend the borders. The neighbours are there, lurking, waiting to cross at the smallest carelessness. They can not drop their guard. But when Margaret begins to ask too many questions, their musical comedy life turns into a wild tragedy.

A moving piece, with a stormy vision (…) A sober, direct text that deals with sensitive contemporary issues (…) A work of many shades, measured with pinpoint accuracy (…) La revista del diario. Miami. 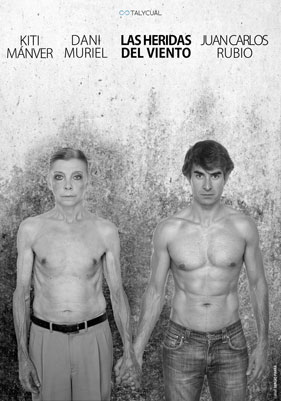 WOUNDED BY THE WIND

SCARRED BY THE WIND

The death of his father obliges to David to take over his legacy. Among his possessions, he finds something unexpected: love letters from another man. Puzzled by the discovery, he decides to visit the alleged lover of his father and find out the truth.

«Las heridas del viento” is theatre with a capital T, that kind of work whose universal theme works in any culture. The true lovers of the theatre can not miss it. The Miami Herald.

A masterpiece. Shocking dialogues, direct darts to the sensitivity of anyone. El Periódico. New York.

…The audience quickly forgets that a woman is playing the role of a man who first appears as a woman. Without any noticeable effort to drop the level of her voice, she convincingly portrays Juan, whose deep love of David’s father was not reciprocated despite the lawyer’s hiding his letters away for years. Eventually Juan shows David blank pages that his father sent Juan in response to his passionate correspondence. The special photo that the author has kindly provided reveals the dual nature of both characters in this two-hander play….

…Though at times overwritten — too many fancy phrases, especially in Juan’s final monologue — Rubio’s one-act Heridas is Theater with a capital T. It provides the kind of play whose universal theme works in any culture. For the serious, Spanish-speaking theatergoer, Heridas shouldn’t be missed… 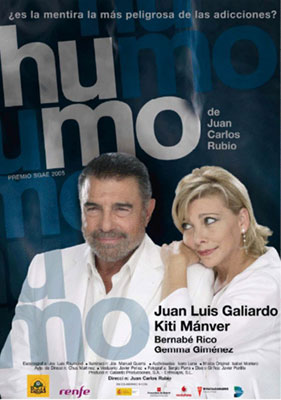 Jack Rolling has been traveling around the world for almost two decades helping everyone who pays for it to get rid of the dangerous addiction to cigarettes. His famous therapy has brought him to Miami, city where his ex-wife Susan lives. Jack decides to visit her in the local newspaper where she works and confess her the most shameful secret: he has started smoking again. Once together, truths and lies will come to the surface. Nothing is what it seems to be. Past and present merge in a long night. And it is that it’s difficult for both of them to admit that the most dangerous addiction that they share is his own love … Will they get over it?

One day, Luna discovers that her best friends have lost the ability to dream. Worried about it, she begins to investigate to find out the reason of this mysterious situation. Helped by two of her dreams, a tap dancer turtle and an opera singer who tend to a diva temperament, she ends up finding the culprit of all: the enigmatic Tragasueños. Luna doesn’t hesitate a moment to stand up to him. Of course, to do it she will need the help of her best friends. Will she have the support of them? 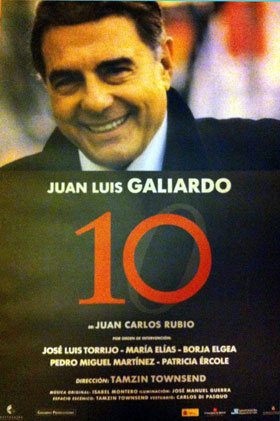 He doesn’t know what to do with his life, despite accumulating success, money and recognition. He is a trapped man, unable to make decisions that make him regain control of his happiness. He prefers to blame those around him for his problems rather than accept his own fears. But he will have to face the change when events do not leave him any other choice. 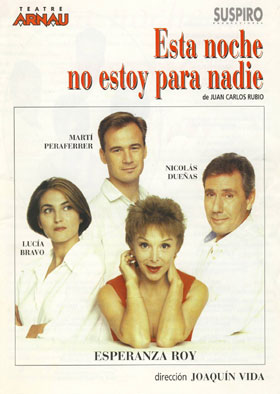 A mother and her daughter, both divorced at the same time and short of money, are forced to share a small apartment. They clash all the time due to their opposing characters, and especially over a long night in which their former husbands decide to make an unwelcome visit

This website uses cookies to improve your experience while you navigate through the website. Out of these, the cookies that are categorized as necessary are stored on your browser as they are essential for the working of basic functionalities of the website. We also use third-party cookies that help us analyze and understand how you use this website. These cookies will be stored in your browser only with your consent. You also have the option to opt-out of these cookies. But opting out of some of these cookies may affect your browsing experience.
Necessary Siempre activado
Necessary cookies are absolutely essential for the website to function properly. This category only includes cookies that ensures basic functionalities and security features of the website. These cookies do not store any personal information.
Non-necessary
Any cookies that may not be particularly necessary for the website to function and is used specifically to collect user personal data via analytics, ads, other embedded contents are termed as non-necessary cookies. It is mandatory to procure user consent prior to running these cookies on your website.
GUARDAR Y ACEPTAR
Ir a Arriba